The “Streets of Sḵwx̱wú7mesh” shirts are ready!

The Streets of Sḵwx̱wú7mesh Series is a look at the original places and their names in the Sḵwx̱wú7mesh homelands. You might know of places like Deman, Granville, Davie, Commercial Drive, Hastings. 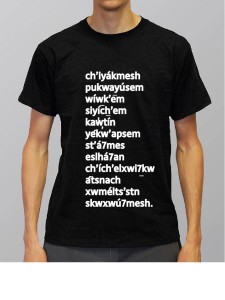 Place is a hallmark of identity. In order for Vancouver to exist, it involved an erasue of Sḵwx̱wú7mesh place, and thus identity.

$30 T-Shirts in men’s and women’s sizes. All proceed goes towards the Skwomesh Language Academy and the upcoming language immersion house starting in September.

you can contact Khelsilem Rivers or purchase them here from the Thistle paypal!

<—(it’s on the left there, it says donate, but don’t worry just say you want to buy a shirt and perhaps email Khelsilem too)!

the Thistle is thrilled to support Khelsilem by printing the shirts!

*special thanks to aly and sam 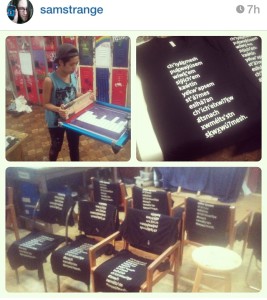 6 thoughts on “The “Streets of Sḵwx̱wú7mesh” shirts by Khelsilem Rivers!”